Skip to content
Press Enter / Return to begin your search.

A country villa,
built in 1880 for the summer retreat,
with a large sunny garden 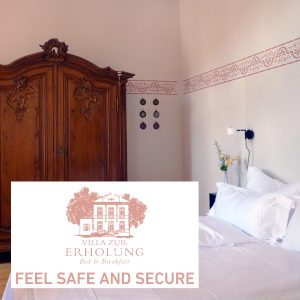 The Middle-Rhine valley has been since the beginning of the 19th century the embodiment of the romantic countryside. Its nature and mild climate attracted well-off business people from the lower Rhine region, who found it to be a refuge from their hectic city lifestyle. Their love of the region mirrored itself in the many grand country houses that they built here so that they could spend, sometimes for only one week, their summer retreat.

From 1850 in Niederbreisig, between Coblenzer Chaussee and the Rhine, wonderful Summer villas were also developed from which only a few today exist, and one of these last historical witnesses is the „Villa zur Erholung“. Built in 1880 for the textile manufacturer Wilhelm Montz and his second wife Franziska née Soltau from Mönchengladbach, this centrally located Bed & Breakfast is now open to cyclists, wanderers, business travelers and tourists, who are seeking something special. One can choose between four different rooms and a junior suite in the garden house, which reflect the spirit of those times gone by.

Generously-sized rooms, some with balcony, lovingly furnished with selected antiques as well as furnishing objects by well-known architects and designers, many whimsical accessories allow you to forget every day life. However, the villa’s guests, in spite of the historical ambience, have no need to abstain from today’s comforts and, last but not least, adding to your many timeless delights – the small but fine breakfast, or a break in the sunny, old tree-lined garden.